skip to main | skip to sidebar

Good to See the Penguins Are Still Alive

Which, unfortunately, is more than I can say for my pattern of posting to this blog. It's not that I haven't had anything interesting to write about--it's just that I've been negligent. I was even called out on my negligence over Thanksgiving (thanks, Elliot), and still I failed to post anything (sorry, Elliot).

Also, for those of you who are disappointed that I didn't write my annual thrashing of that consumer-bastardized disaster known as Valentine's day, well, I spent it staffing JV practice.

Of course, now that I am sitting down to write, it's midnight, and I run the risk of falling asleep mid-post. Since I'm coaching full time (and dealing with pitchers, no less...pitchers!), I'm usually sitting at the computer at this time updating charts or searching for a quote of the day for the next day's practice. Alas, here I am...fresh out of ideas. So, here's a haiku.

Much to be written
But lacking motivation
So bedtime instead

It's hell getting old...now get off my lawn. Goodnight.
Posted by Unknown at 12:09 AM No comments:

Need a Blog? The Answer is Penguins!


Live Video streaming by Ustream
Posted by Unknown at 6:56 PM No comments:

Email ThisBlogThis!Share to TwitterShare to FacebookShare to Pinterest
Labels: penguins

As baseball fans everywhere rejoice that the absolute joke that is the NBA can be pushed to the back burner now that everyone has reported for the spring, we can turn our attention to our other passion that is tangential to the field--hating on the mind-numbing commentary that comes from ESPN. If you've ever muted your TV the minute you saw Tim Kurkjian on it (and who hasn't?!), then J.P. Arencibia is your hero. Aside from being a big league catcher and Twitter superstar which already make him a certified badass, he absolutely blew Kurkjian up on national TV.

Bravo, J.P. Bravo. And as I stated on Facebook and Twitter, if he has, in fact, ruined Kurkjian's TV career, Arencibia should go into Cooperstown immediately.
Posted by Unknown at 10:18 AM No comments:

Plain and simple, this song is forever associated with the scene in Office Space when they're beating the hell out of the printer. PC Load Letter...bitches.

And all I gotta say to you
Wannabe, gonnabe, cocksuckin', pussy-eatin' prankstas
'cause when the fry dies down what the fuck you gonna do
Damn it feels good to be a gangsta

Now all I gotta say to you
Wannabe, gonnabe, pussy-eatin' cocksuckin' prankstas
When the shit jumps off what the fuck you gonna do
Damn it feels good to be a gangsta

And now, a word from the president!
Damn it feels good to be a gangsta
Gettin voted into the white house
Everything lookin good to the people of the world
But the mafia family is my boss
So every now and then I owe a favor gettin' down
Like lettin' a big drug shipment through
And send 'em to the poor community
So we can bust you know who
So voters of the world keep supportin' me
And I promise to take you very far
Other leaders better not upset me
Or I'll send a million troops to die at war
To all you republicans, that helped me win
I sincerely like to thank you
'cause now I got the world swingin' from my nuts
And damn it feels good to be a gangsta
Posted by Unknown at 4:40 PM No comments:

I hate Valentine's Day. I think it's stupid, pointless and outright exploitative. And it highlights a fundamental flaw of human nature--expectations. I forget where I heard/read this, but "Expectations are resentments under construction." Oh my Lord is this ever true on this day. Valentine's Day sucks.

If you're single, the issue is self-explanatory. But guess what? Even if you're with/seeing someone, it still sucks. God help the poor suckers who date high maintenance girls who expect (there's that word again) to be treated like princesses because it's February 14. And if you just started seeing someone? Good luck deciphering context and body language cues to figure out "where you are" and therefore "what's appropriate." It doesn't matter what you do. You will be wrong.

Any relationship (or lack of a relationship) has numerous outside influences on it. Some can be controlled, and others can't. The fact that there is one day a year that these outside influences are all packaged (by flower/chocolate/greeting card companies) as something that can and should be controlled on anyone's relationship situation is ludicrous. Yet, that's really what's happened. So not only are expectations omnipresent, they're at an all-time high and completely unreasonable. February is a time that we're bombarded with images of what love "really" is and what gift is a "true" indication of how much another person cares about or values us. This is really what it's come to.

With all this going on in the background, my favorite only favorite guest blogger gave her undergraduate students the assignment to analyze a TV commercial or print advertisement, note appeal made by the ad and then spoof it. At least someone's trying to use this to get smarter, right? Apparently not, but that's a different tirade for a different day. I don't know about the rest of my readers, but had I been given this assignment in an undergraduate class the week after the Super Bowl, I would have been pumped because it's easy. These guys? Not so much, apparently.

So, children, while you're otherwise occupied, I will do your homework.

The appeal of this commercial is pretty obvious. Her name is Adriana Lima. She wants men to buy flowers and implies that doing so will get them laid by the women in their lives. Simple. Clear. Transactional. According to this commercial, that's what Valentine's Day is supposed to be. Gents, that's as far as this commercial thinks you're capable of looking.

But guess what, ladies! Before you snicker and start gloating, note the undertone. You will put out if your man mindlessly gives you flowers because a super model on a Super Bowl commercial told us all that's how it works. A simple transaction resulting in sex. That's called prostitution. Adriana Lima may be subtly calling men idiots, but she's even more subtly calling women hookers.

As for the second part of the assignment, if I was actually doing this for a grade, I could easily mock the entire video, but this is just a blog. So here's my answer. 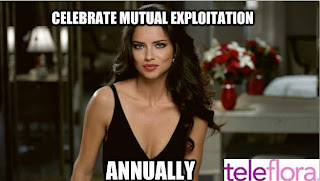 Love is something amazing that is shared by people around the world every day--not something that shows up once a year in some empty grandiose gesture. It pisses me off that people allow a few industries to bastardize its meaning for the sake of sales.

I read an article that stated that those celebrating Valentine's Day will spend an average of $126.03. I'm not sure of the methodology of the survey, but as sad as it is, I absolutely believe that number. There are a bunch of other interesting nausea-inducing facts in that article. If you've eaten something that isn't sitting well and want to throw it up, read the whole article.

I'm sure once upon a time Valentine's Day was a valid celebration of real love, but like most things, we've completely screwed the whole deal up now, and now we're left with this.